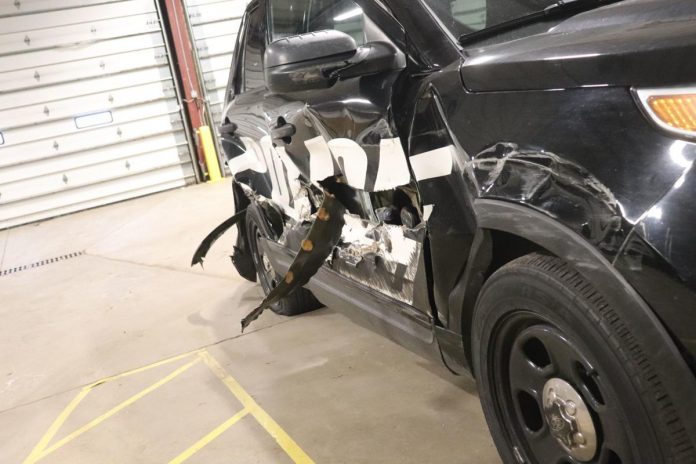 “Being down two squads hurts, quite honestly,” Police Chief Brett Empey said. “We have one school resource officer right now driving his personal vehicle to school. If we can get some squads up and running sooner rather than later that would be ideal.”

On Dec. 5, 28-year-old Shakopee resident Theodore Sherman Grimm fled police in a pickup truck hauling a skid steer loader on a trailer, reaching speeds over 100 mph, according to documents filed in Scott County District Court. Both police vehicles — 2013 and 2018 Ford Explorers — were totaled as they pinned Grimm’s truck on either side and forced him to stop south of Belle Plaine.

Empey said replacement interceptors have been very difficult to find readily available and ordering from the factory currently has about a 12-month waiting period. With help from Wolf Motors, police located a 2019 and 2020 Ford Explorer Interceptor models from dealers in Chicago, Illinois and Fergus Falls, Minnesota.

“The major difference between the two is the purchase of the new equipment that has to go inside that 2020 (model),” Empey said.

The League of Minnesota Cities Insurance Trust is reimbursing the city $31,225 for the two totaled squads, which is the combined depreciated value. This leaves the city with a $57,161 bill. Empey said the police department ended 2019 under budget enough to cover the remaining cost.

“(Grimm) was an employee of the company who actually owned the vehicle and committed a crime while this happens, so it probably would not pay out but we could seek restitution from the criminal court process,” Empey said.

Grimm has been charged with three felonies: fleeing in a motor vehicle, second-degree assault with a dangerous weapon and obstruction of the legal process. Grimm was charged with two gross misdemeanors — fourth-degree assault of a peace officer and obstruction of the legal process — and three misdemeanors: fourth-degree driving while intoxicated, failure to stop for an accident to property and reckless driving.

If convicted of all charges, Grimm faces a maximum of 17 years in prison and $38,000 in fines.