CHICAGO (AP) – Khalil Mack had a sack and fumble recovery, Eddie Jackson returned an interception for a touchdown and the Chicago Bears tightened their grip on the NFC North with a 25-20 victory over the second-place Minnesota Vikings on Sunday night.

Mack and Jackson led a dominant effort by the defense. And Chicago (7-3) took a big step toward its first division championship since 2010.

The Bears have won a season-high four in a row. And the past two have come against the NFC North after they dropped 10 straight to division opponents.

Chicago simply suffocated the Vikings (5-4-1), dominating in total yards (308-268) and time of possession (34:29-25:31) even though quarterback Mitchell Trubisky had his difficulties.

Trubisky was 20 of 31 for 165 yards and a touchdown. But he was intercepted two times by Anthony Harris. 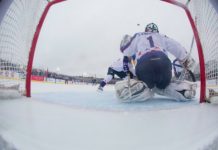