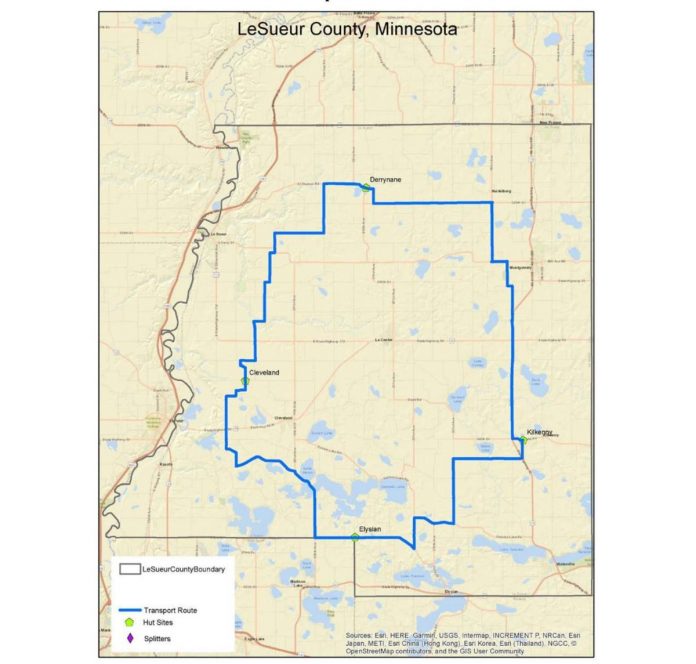 Le Sueur County Commissioners met with several cable providers July 16 to explore the possibility of installing fiber optic cable across the county to reach under-served rural areas. The internet service provider Bevcomm expressed interest in the project and the county commissioners voted to approve a new loan program to help the company with its grant application.

At a July 16 County Commissioners meeting, the board heard from Chris Konechne, an engineering consultant with Finley Engineering, who presented a plan to bring broadband internet access with download speeds of 100 Mbps to under-served rural areas. Currently, 3,253 households and businesses in the county depend on wireless internet speeds below the Federal Communications Commission’s standards for broadband.

The plans call for the installation of a 74.6-mile long underground ring of fiber optic cable. This ring would have network huts in the towns of Derryanne, Cleveland, Elysian and Kilkenny and would serve as a backbone for all under-served households to be able to connect to. The ring would also be designed to be self-healing, which would ensure that in the event of a break in the cable, the ring would still continue to function and provide internet.

However, these plans face a major obstacle: cost. To reach unserved areas, it could cost between $16.5 million and $19 million depending on how many households are serviced. In order to be able to pay for the project, Konechne said the county will need to find an ISP willing to contribute $3-4 million in equity and a grant of at least $1 million.

County Administrator Darrell Pettis came to the Board of Commissioners during a July 22 meeting to report the county’s progress in courting ISP partners. Several telephone, cable and internet service providers, including Bevcomm, Jaguar and the Minnesota Valley Electric Cooperative (MVEC) expressed an interest in a partnership. Among the three providers who have expressed interest, Pettis stated that Bevcomm was the most intrigued.

“The program is more of a points getter,” said Pettis. “If they can show some county or local government interest and support, then they can get some extra points to go toward their grant program.”

The county, however, did not have a loan program for this type of project, so Pettis asked if the commissioners would be interested in creating one. The program would need to be created before the July 31 grant application deadline.

Commissioner Steven Rohlfing asked what would happen if the Bevcomm refused to pay back the loan.

“We use the courts,” Pettis answered. “If we had a revolving loan program they would have a responsibility to pay us back.”

“They have no intention of actually using the dollars,” Pettis added. “The intention is to get points.”

“They score higher if the county participates in some way,” said Commissioner John King. “That would hopefully lead to us getting some of the grant dollars that are available.”

2 arrested in shooting of doctor in Edina parking ramp