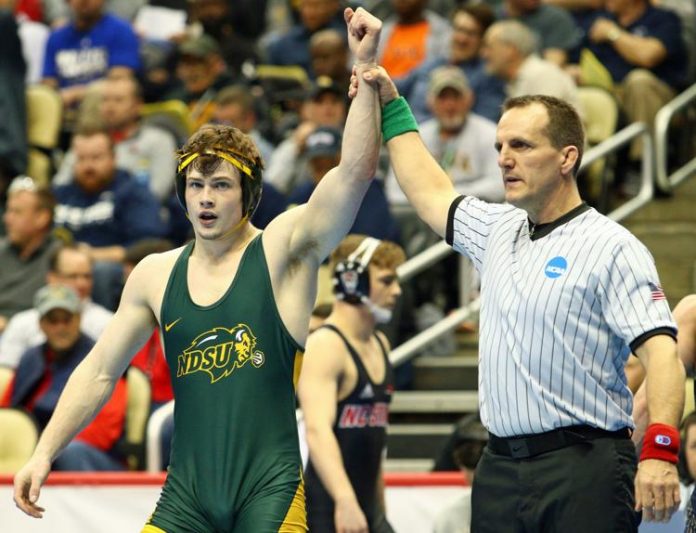 Andrew Fogarty finished his junior season wrestling at North Dakota State University by going 2-2 at the NCAA Championships in Pittsburgh this past weekend.

Fogarty, a redshirt junior from Jordan, opened the 165-pound bracket at the NCAA Championships with a 17-2 tech fall at 7 minutes over Gardner-Webb’s Tyler Marinelli.

Fogarty gave up an early takedown and then went to work against Marinelli. It was his fifth tech fall of the season.

In the second round, Fogarty lost a 9-2 decision to No. 4 seed Evan Wick of Wisconsin and moved to the consolation side of the bracket. Wick went on to finish in fourth place.

Fogarty stayed alive in the tournament when he rallied from a 5-4 deficit in the third period for a 10-7 decision against Tanner Skidgel of Navy in his first consolation bout on March 22.

He was eliminated from the tournament when Te’shan Campbell of Ohio State used a pair of two-point near falls in the third period for a 7-1 decision over Fogarty.

Fogarty completed the season with a 22-6 record and a second place finish in the Big 12 Championships.

This was Fogarty’s third straight year wrestling at the NCAA Championships. He will try to make it four in a row in 2020 when the NCAA wrestling championships are held at U.S. Bank Stadium in Minneapolis.

As a team, the Bison finished the NCAA Championships in 36th place with 6.5 points. Penn St. won the NCAA title with 137.5 points followed by Ohio St. in second with 96.5 points.