Gertrude Catherine (Bushard) Klaras, 10-06-1931 to 5-24-2019. Born and raised near St. George and graduated from New Ulm Catholic School in 1949. Gertrude married Richard Klaras of St. James, MN in September 27, 1952. Together Dick and Gertie created quite the family. And, as the family grew, they moved from St. James to Victoria, MN and finally settling on an eighty-acre parcel in rural Rice County, west of Webster, MN. Richard and Gertrude had 10 children together; Jeff, Cathy, Lynn, Mike (Mary), Tom, Agnes, Bill (Shelley), Tony, Steve (Jenny), Barb (Jim) Kivisto. Gertrude survived by many friends, a sister, several in-laws, six remaining children (including spouses and special friends), son in-law Warren Kohout, eighteen grandchildren/step grandchildren and twenty-four great grandchildren. Her children and grandchildren/step-grandchildren were kept on their toes when playing Cribbage, Phase 10 and 10,000. She loved flowers, the outdoors, humming birds and family gatherings. She also enjoyed traveling with her late husband to New York City, Toronto, Tuscan, AZ and southwest Texas. Gertrude was preceded in death by husband; Richard, her children; Jeff, Cathy, Lynn and Agnes, as well as brothers, sisters, brother in-laws and sister in-laws. Her gift for making German Potato Salad and Sugared Popcorn has her children and grandchildren hoping the next generations have acquired that talent. Time will tell! In her actions and deeds, especially as the curtain was closing, she was a teacher. It is now up to us to use what we’ve learned and give, as she gave! Gertrude, Gertie, Mom, Grandma, Great Grandma and friend; you will be greatly missed. Mass of Christian Burial 10 AM Thursday, June 6, 2019 at Most Holy Trinity Catholic Church Veseli, MN. Vitiation 4-7 PM Wednesday, June 5 at White Funeral Home in Lonsdale, MN. Online condolences at: www.whitefuneralhomes.com 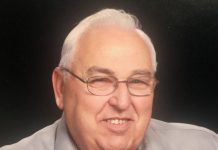