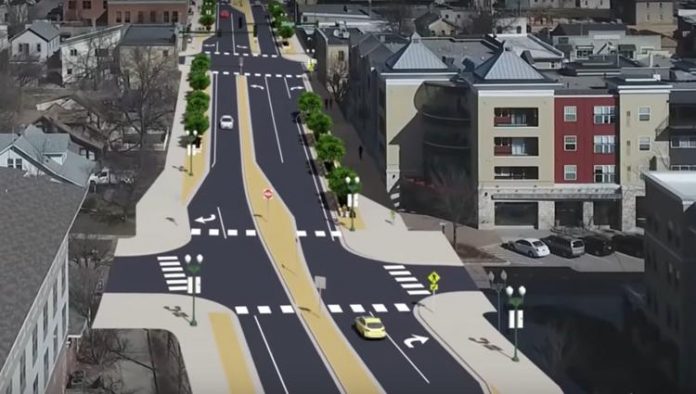 Nearly all funding is secured for a planned Highway 41 reconstruction, according to officials. The city recently received a $3.5 million grant from the state’s Transportation Economic Development Program (TED) to readjust lanes, parking and pedestrian areas through downtown Chaska.

It was part of a $18 million competitive state grant to cities with highway projects aimed to improve local economies and transportation.

“That was a big grant to help us, get us over that final hump and 2022 probably (start) construction,” Mayor Mark Windschitl said at a recent Chaska City Council meeting.

Current reconstruction plans include shifting the highway from four lanes through downtown to three lanes — one northbound lane, one southbound lane, and turning lanes. It would also include a pedestrian underpass. It’s all set to occur in 2022 and 2023, said Principal Transportation Engineer Eric Johnson, who works for Bolton & Menk.

In a document, the city said 80% more crashes happen on the segment of Highway 41 that runs through downtown than the state average.

Over 18,000 vehicles currently pass through downtown every day, including over 2,000 trucks. The city said limited turn lanes contribute to weaving vehicles and traffic is often slowed to wait for turning vehicles throughout downtown.

Safety is also an issue, with pedestrians needing to cross four lanes of traffic on the highway.

“This project should have a major positive impact on downtown Chaska, making the traffic flow more efficiently and safely through downtown (and) cater much more to pedestrians throughout the entire downtown area,” said City Administrator Matt Podhradsky, in a council memo.

The city still needs about $2 million in firm funding commitments for the $23.6 million project, said Podhradsky, which includes a portion of Highway 61 just east of 41. In 2017, the total project cost was estimated to be about $15 million.

He said remaining money could come from federal funds given to local governments, state bonding funds, or the county sales tax.

“The city, county and state will continue to work together to get the remaining needed funds assembled ensuring this project begins construction in 2022,” Johnson said.

Road plans haven’t changed since the reconstruction was introduced in 2017, Johnson said. Two lanes — one northbound, one southbound — would carry traffic through downtown Chaska. Right turn lanes at each intersection and left turn lanes, at Second and Fourth streets as well as at County Road 61, are also in the plan.

Street parking on Highway 41 would be eliminated in favor of lots along Walnut Street. Forty lots would be lost during reconstruction.

In an earlier meeting, Podhradsky said around a third of parking area along Highway 41 isn’t currently being used because drivers use more than one stall.

Currently near the County Road 61 and Pine Street intersection, pedestrians can activate a yellow flashing light.

With new construction plans, it would be replaced by a pedestrian-controlled stoplight, turning red when a pedestrian presses a button. Sidewalks along the roads are also expected to be widened to ADA standards, officials said. Medians would also expand in front of City Square Park.

A pedestrian hybrid beacon, which includes a combination of yellow and red flashing lights, is proposed on Highway 41 just north of the Chaska Curling Center. City officials say it’s currently a problem area.

“I still hold my breath when I go through that intersection,” Mayor Windschitl said.

The pedestrian underpass would run under Highway 41, in the area of Dolce Vita Wine Shop and Shop 501 & Company, according to project managers at Bolton & Menk.

Also in the plan is a capacity improvement, meant to adjust roads for higher levels of traffic into the coming decades.