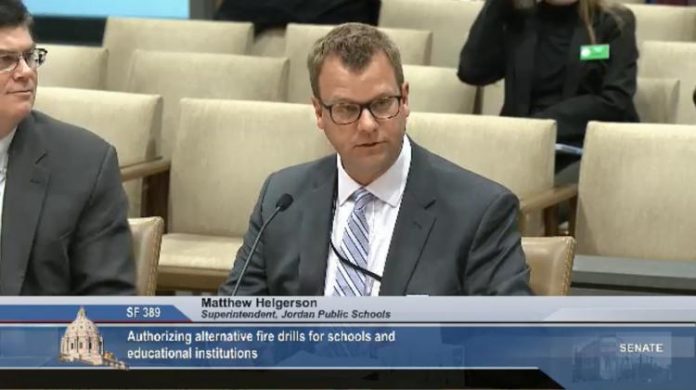 In an age where mass shootings are becoming one of a school’s greatest safety concerns, Jordan Superintendent Matt Helgerson is leading an effort to give students and staff the option to respond to school fire drills in the safest way possible.

In recent months, Helgerson has twice testified at the capitol in support of SF 389, a bill sponsored by Sen. Eric Pratt, R-Prior Lake, that would give school districts the option to decide whether one of their five mandated fire drills can deviate from a traditional evacuation drill.

The proposal comes in the wake of a school shootings where the shooter has pulled a fire alarm or created a small fire to active them, create chaos and draw students and teachers out of classrooms. This tactic was used in the Marjory Stoneman Douglas High School shooting in Parkland, Florida last year.

Pratt’s bill would give Minnesota schools the option to practice an alternate emergency routine for one of their five mandated fire drills. If passed, Helgerson said Jordan schools would use that option to engage in an emergency plan in line with their active shooter precautions.

“We haven’t had a fire death of more than 10 students in 61 years … we want our kids to be safe in case of a fire but we also know that they’re facing other challenges they didn’t face in 1958,” Pratt said.

The issue first caught Helgerson’s attention during the construction of the Jordan Middle School and the Community Education and Recreation Center. In developing the building plan, the district reassessed its safety protocols with the Department of Homeland Security and local law enforcement. At that time, the district revised its local emergency action plan to establish a process they call a “lockdown with options.”

“It’s a protocol where we implemented ‘run, hide and fight,’ which is a change from the ‘shelter in place’ protocol of the past,” Helgerson said.

As part of the “run, hide and fight plan,” staff and students are instructed to stop and assess each situation prior to leaving the classroom, and ultimately the building, in response to a fire alarm. During a fire alarm, for instance, students and staff are encouraged to look and listen for signs of smoke, fire or anything out of the ordinary before exiting a classroom. If smoke or fire is not detected, it’s recommended students and staff stay in the classroom until the situation changes.

“We informed families, staff and students of this change, and I received a call and visit shortly thereafter from our fire marshal,” Helgerson said. “I was instructed to end this new practice immediately or I would be cited and he would shut our district down — that’s a direct quote.”

Helgerson familiarized himself with the law, which he interpreted as antiquated, since modern school buildings are equipped with sprinklers in every room.

“I think in 2019, unfortunately, students are much more likely to be killed due to a school shooter than a school fire,” Helgerson said. “In my opinion we must equip staff and students with options.”

Helgerson said the bill has bipartisan support and he hopes it will become law during the session. Last year the bill was included in the omnibus education bill passed by the Legislature, but that bill, like several other omnibus bills, was vetoed by then-Gov. Mark Dayton.

This year, with a divided Legislature, the bill may stand a better chance making it past Gov. Tim Walz’s desk. But first it has to be approved by the Legislature.

The bill has been recommended by the Senate Judiciary and Public Safety Finance and Policy Committee and awaits approval in the Senate. The House companion bill, HF 431, sponsored by Rep. Tony Albright, R-Prior Lake, has been referred to the House Education Policy Committee.