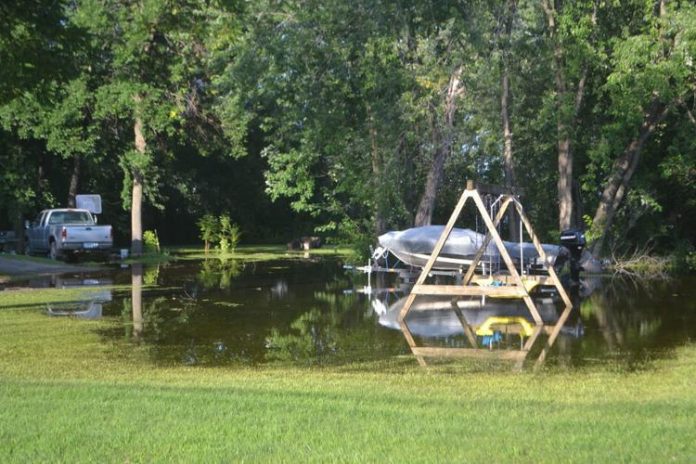 “Waterville is holding up to its name,” County Emergency Management Director Ann Traxler told the Board of Commissioners.

Streets near Tetonka Lake and Upper Sakatah Lake including Marian Street, Lillian Street, and Sakatah Boulevard were flooded due to heavy rainfall on the night of July 19 and the morning of July 20. The town experienced 2.5 inches of rainfall in a short period of time, causing water levels to rise 7 inches. Water levels then rose another ¾ of an inch from the night of the 21st through the morning of the 22nd.

On July 25, Waterville Emergency Management announced that waters have begun to recede. However, the city warns that water levels will remain high in the coming weeks and more rainfall could bring those levels up again.

To help residents deal with flooding, the city of Waterville has provided sandbags at the city shop in the south sand shed. The city has advised residents to closely monitor water levels on their property and to avoid traveling on recently flooded roadways if possible.

The county’s flooding problems go far beyond Waterville, though.

“All of our lakes in the southern part of our county are over the brim. They’re running over,” Traxler told the Board of Commissioners.

In addition, Traxler reported that the Minnesota River is cresting and is carrying debris from the recent storms, prohibiting much of the water from moving. For these reasons, the entire county is covered in the state of emergency declaration.

“Our threshold we have to meet for Minnesota state funding is $52,000 and for federal it’s $104,000.” said Traxler. “I do not think we’re going to have any problem meeting that. We have people in Waterville working around the clock.”

Emergency funds from the state or federal government are not guaranteed, though, and if they do come, Le Sueur could be waiting many months before their application is processed. In an interview, County Administrator Darrell Pettis noted that the county had declared a state of emergency in spring due to flooding in Waterville, but FEMA inspectors have not yet arrived to assess the damages.

The county has discussed ideas on water storage methods with other counties in the Cannon River watershed, but without funding, Pettis says, there is little the county can do.

“We need state or federal funding to implement these things,” he said.

According to Pettis, there are currently no flood prevention plans being implemented at a county level.