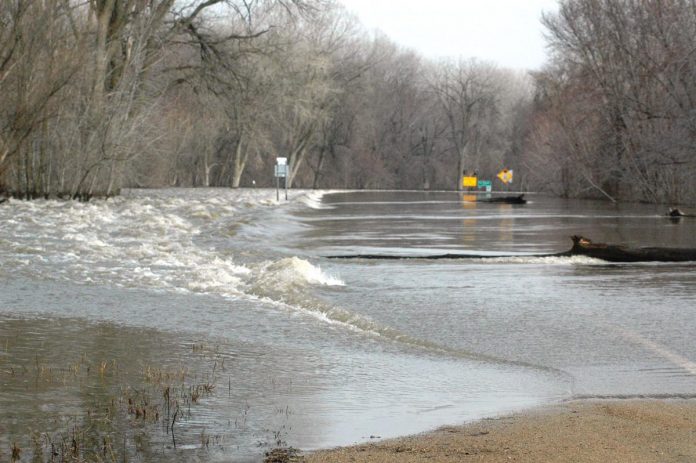 Le Sueur County joins the growing list of counties throughout Minnesota to declare a state of emergency due to the flooding this spring.

During the Le Sueur County Commissioners board meeting on Tuesday, the commissioners agreed to declare a state of emergency to help clean up and fix damage caused by the high amounts of flooding this spring has brought on.

Traxler said that many of the townships have already reported damage to their roads due to the flood waters.

The county can also receive help from the federal government if the damages are over $100,000.

“If we don’t declare a state of emergency, we could miss out on some money,” Traxler said. “If we don’t reach the amount of damages, then there’s no penalty as well.”

Traxler said that the one thing that helped tame the floods this season was the cold nights that re-froze the waters.

“This was an abnormal spring,” Traxler said.

In other news, the board of commissioners also agreed to change how citizens can talk to them during meetings.

The previous policy included allowing each citizen a specific spot on the board’s agenda, which meant that citizens had to contact the county and set up a specific time to come in during a meeting. This route also gave citizens as much as time they wanted.

But on Tuesday, the commissioners agreed to try something new in order to save both the citizens’ and commissioners’ time.

“Many city councils typically have a citizen time where they allow two to three minutes for public comment,” County Administrator Darrell Pettis said.

The commissioners decided to try something similar.

“I think this would be easier for the public to approach us with their concerns,” Commissioner Lance Wetzel said.

Pettis agreed with him.

“People don’t like to call in and set up a time,” Pettis said.

But there would be some ground rules to the citizen time. The commissioners agreed to allow 10 minutes for citizen comment at every board meeting starting at the next meeting on April 16. But one person will not be allowed to use the full 10 minutes. Instead, they will give one topic or person three minutes for discussion before they move on to the next person.

In order to keep track of people who want to speak to the board, there will be a sign-up sheet outside of the room and people will speak on a first-come-first-serve basis.

“The biggest problem will be watching the time,” Commissioner Steve Rohlfing said. “We need to hear the public’s concerns, but we also need to be respectful of their time and ours.”

Despite having to watch the time, all of the commissioners and County Attorney Brent Christian, believe that this will be a positive change for the board.

“I think it’s fairer to you and the citizens,” Christian said. “This gives you the chance to research and get back to them rather than giving them an answer on the spot.”

Wetzel felt like it would be very similar to the phone calls each one of them receives.

“It’s really no different than every day,” Wetzel said. “We all get the phone calls.”

“I think we’ll give this a try and we can revisit it in six months or a year to see if anything needs to be changed,” Chairman John King said.