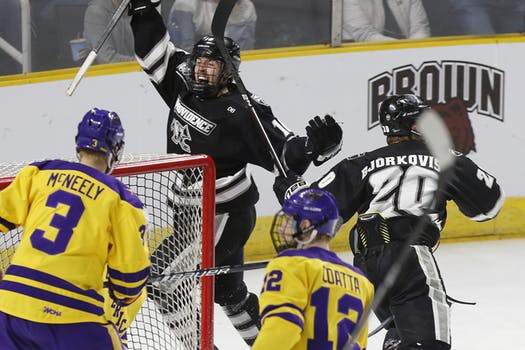 Providence, R.I. – Minnesota State Mankato took a three-goal lead in the first 12 minutes of the game but lost 6-3 to Providence at the Dunkin Donuts Center in the East Region semifinals on Saturday.

“Like I told you, it was going to be a 2-1 game, grind it out,” Friars coach Nate Leaman said. “I thought we had a good start, a good first five minutes. We had one called back there and then they capitalized on their opportunities.

Charlie Gerard scored on a rebound at 7 minutes, 52 seconds of the opening period and Jake Jaremko got a goal on a nice feed from Reggie Lutz 36 seconds later to put the Mavericks, the No. 1 seed in the region and the third overall seed, ahead 2-0. Nick Rivera made it 3-0 on an unassisted goal at 11:08.

Josh Wilkins answered with a power-play goal for the Friars at 13:12. They tied the score with two goals in the second. Mimal Sukumaran scored at 4:37 and Kasper Bjorkquist, on a power-play, at 9:33.

“The first power-play goal we scored, that helped us in the locker room,” Leaman said. “And then [Sukumaran’s] goal, that made it 3-2, I thought that got the building alive a little bit and kind of got us going.”

“[On] our power play in general, we were great on retrievals, we were working hard, moving the puck quick,” Thompson said, “which opened up a lot for us to hit the seams.”

Dryden McKay finished with 23 saves for the Mavericks (32-8-2), who are 0-6 all-time in NCAA tournament games. The Friars’ Hayden Hawkey made 31 saves.

MSU Mankato was 0-for-3 on the power play, while Providence was 4-for-7.

Cornell 5, Northeastern 1: The Big Red (22-10-4) scored the first three goals in the second period to take a 4-0 lead. Mitch Vanderlaan got what proved to be the game-winner at 54 seconds. Austin McGrath made 20 saves for Cornell; Cayden Primeau stopped 14 shots for the Huskies (27-12-1).