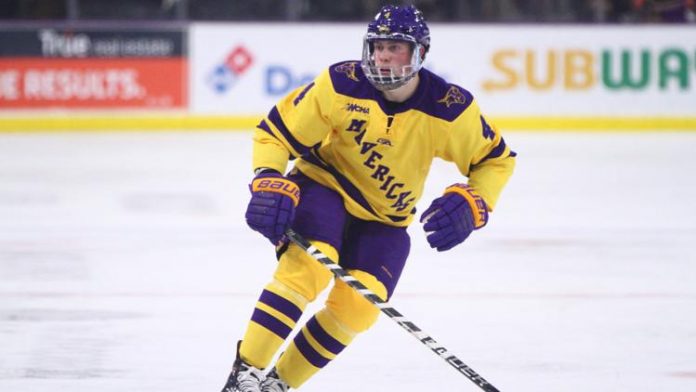 Andy Carroll, Northfield HS Graduate and freshman defenseman for the Minnesota State Mankato Mavericks, is preparing to try and make the lineup for top-seeded MNSU’s first-round NCAA tournament matchup Saturday afternoon against fourth-seeded Providence in Providence. To start the season, the Mavericks featured seven defensemen who already had at least a year of college experience, in addition to a pair of freshman defenders alongside Carroll.

Carroll’s been able to earn a fair amount of ice time this season, and believes he’s done well with that time.

He’s scored once this season in a 4-1 victory against Michigan Tech on Jan. 4, while accumulating four assists and 21 shots on net. A better indicator of Carroll’s positive influence is his +13 plus/minus, which is tied for ninth-highest on the Mavericks.

More importantly for Carroll than those counting statistics is the fact he still has a chance to play this late in the season.

MNSU has set a program record for regular-season wins this season, and snagged both the regular-season and postseason WCHA titles in addition to earning one of four No. 1 seeds in the NCAA tournament.