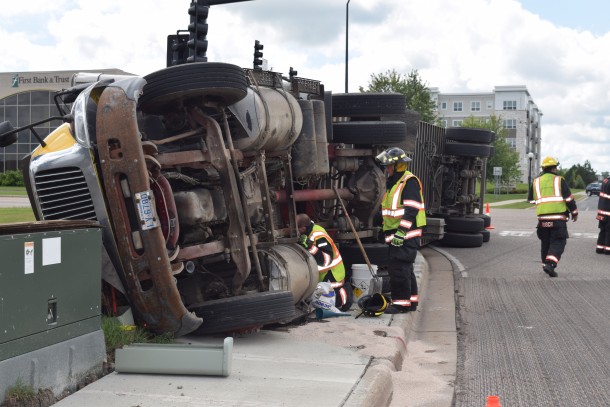 A semi truck tipped over around 11:30 a.m. Monday, July 29, on 10th Ave. NE (formerly Scott Co. Road 37) in New Prague, coming to rest on the sidewalk next to Roundbank. New Prague Police, North Ambulance, New Prague Fire Department and Scott County Sheriff’s Office are on the scene, and the Minnesota State Patrol is en route. Firefighters pinched off a leak in the fuel line and were soaking up diesel fuel that had spilled. It appears the semi took out one utility box, but just missed a larger one and also just missed a fire hydrant at the intersection. The driver was being treated in the ambulance, but there is no word on the extent of any injuries or if the driver would be taken to a hospital. More information will be posted as it becomes available.