He’s only 23, though, and a recent landing on Minnesota’s first line has helped bring out his best.

Fiala kept up his recent surge for Minnesota with a goal and two assists, and the Wild matched their season high with three power-play scores on the way to a 4-0 victory over the Vegas Golden Knights on Tuesday.

“I hope he can be like this every night. I mean, if he can, then great, he’s come of age,” Wild coach Bruce Boudreau said. “It’s just that right now, he’s in a good place, and I don’t want to bug him.”

Fiala, who arrived in Minnesota around the trade deadline last season in a deal with Nashville for Mikael Granlund, has five goals and five assists in the last five games.

“This year we’re such a bigger family, closer to each other, like each other more,” Fiala said. “It’s more fun this season for sure to come to the rink.”

Joel Eriksson Ek, Jared Spurgeon and Zach Parise scored with the man advantage, giving the Wild an NHL-leading 15 power-play goals in 33 opportunities over their last 11 games. Parise has six during that span, also the most in the league. The majority of those contests have been at home, where Minnesota has the third-best power-play conversion rate in the NHL (27 for 93) at 29%.

Alex Stalock stopped 26 shots for his third shutout of the season, making him 12-5-3 in his last 20 decisions as he keeps pushing to become the team’s top goalie. The Golden Knights had 12 goals in their previous two games.

“They were just hungrier than we were around our net,” coach Peter DeBoer said.

Marc-Andre Fleury, making his 10th start in the Vegas net in the last 11 games, was pulled after stopping 16 shots through two periods. Malcolm Subban relieved him.

The Wild went on their first power play just 3:37 into the game. Eric Staal’s shot glanced off the right post and rolled along the goal line behind Fleury before Brayden McNabb knocked it away. The crowd roared as if the puck had crossed over, but no replay review was initiated.

With some players believing they’d scored, Reilly Smith started a breakaway for the Golden Knights that Stalock denied with a backhanded save. Unfazed, the Wild took the lead with seven seconds remaining on the man advantage when Eriksson Ek knocked in his first career power-play goal.

“I think everybody in the building could see that we weren’t ready to play tonight,” Smith said. “We’ve got to change that and change that quick.”

Spurgeon scored about seven minutes later, swooping in for a rebound of a shot by Fiala. The Golden Knights have given up a whopping 62 first-period goals this season in 58 games.

Fiala, who tied Mats Zuccarello and the just-traded Jason Zucker for third on the team with 14 goals this season, matched his career high with three points while playing with Staal and Parise.

Zucker was dealt on Monday to Pittsburgh for left wing Alex Galchenyuk, a prospect and a draft pick, but the Wild didn’t flinch and won for the seventh time in 10 games. The Golden Knights entered the night in control of third place in the Pacific Division, but they’re now just four points ahead of Wild, who have played two fewer games than them in the crowded Western Conference wild-card race.

Despite dealing the productive Zucker, general manager Bill Guerin said he still expects the Wild to contend to the end for the playoffs.

“Not only a locker room-favorite guy, but a community and city and a state favorite got sent out of here,” Stalock said. “That kind of sends a little wave through the locker room. I think we know we have almost like a deadline. We need to prove that we want it.”

Game notes
Golden Knights center William Karlsson returned without rust from an eight-game absence due to an upper-body injury. He played 22 shifts, with three shots and two hits. “That’s a testament to him, but I think it’s a challenge to our group that a guy that’s been out that long shouldn’t be our best player,” DeBoer said. … Stalock has won three straight starts. He has played in 28 games this season, one more than fellow goalie Devan Dubnyk.

Wild: Host the New York Rangers on Thursday night, their 10th home date in a stretch with 11 of 12 games at Xcel Energy Center. 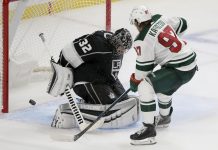 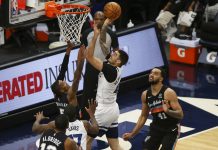