George Frederic Wagar, age 89 formerly of Henderson, Minnesota died on January
26, 2019 in St. Louis Park. A Celebration of Life Service will be at 11:30 a.m. on
Friday, February 1, 2019, with a lunch to follow at the Henderson Roadhaus Event
Center. There will be a gathering visitation time from 9 to 11:30 a.m. on Friday at
the event center. koldenfh@yahoo.com
He was born on May 11, 1929 in Alliance, Nebraska to Harry and Ella (Meyer)
Wagar. As a youth he moved with his family to Bonners Ferry, Idaho. After
graduating from high school he moved to Alaska to work in the gold mines. He
then moved to Chicago and worked for National Steel. He transferred to
Minneapolis and continued his employment with Natiional Steel. George married
Audrey Trimbo on October 13, 1951 in St. Thomas Catholic Church in Jessenland.
They lived in Mounds View for over 50 years. He purchased the Red Owl grocery
store in Henderson in 1981. George was active with business opportunities in
Henderson, Henderson Lions Club, and enjoyed golfing with his friends. He
retired to California and recently returned to Minnesota because of failing health.
He is survived by his children, Bob (Randi Gordon) Wagar of Henderson, Barb
Conrad of Henderson, David (Sandy) Wagar of Forest Lake and Chris Wagar of
Oakdale and grandchildren, Adam (Samantha) Conrad, Erick (Katie) Conrad,
Amanda Bruner and Josh Bruner, Hayden, Preston, McKenna and Finley Wagar
and great-grandchildren, Chloe, Ellie, Mylee, and Cole Conrad and Beckett
Bruner. He was preceded in death by his wife, Audrey in 2001. 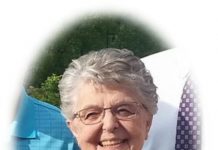