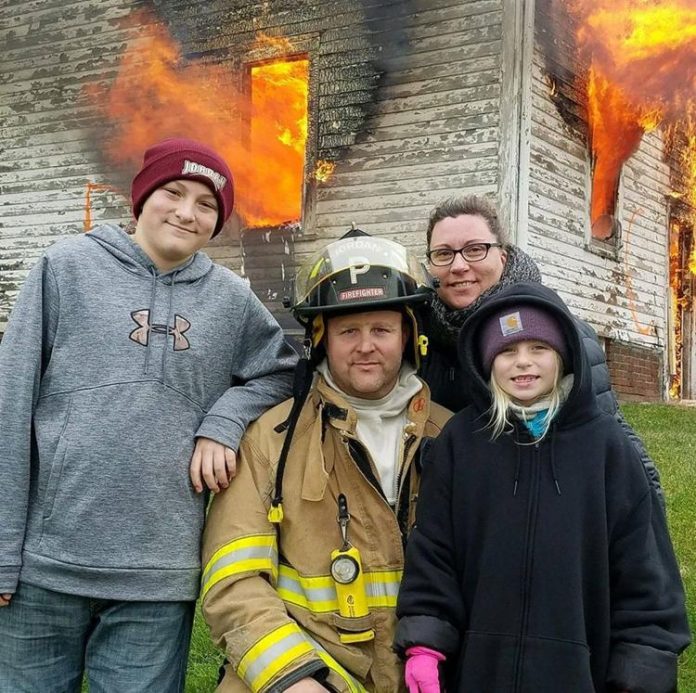 Jason Shoenbauer joined the Jordan Fire Department less than three years ago, but in that short time he’s earned the respect and admiration of his peers, who recently named him the 2019 Jordan Firefighter of the Year.

“It’s a real honor,” Shoebauer said. “I’ve only been on a short time and there are other guys who have been on a lot longer than me — I don’t even know how to explain it.”

Every year the fire department, which consists of more than 30 members, votes for the firefighter of the year. That person’s name goes on a plaque in the fire hall, where their service will forever be commemorated.

“Jason does a good job, I have nothing but positive things to say about them,” fire chief Gregg Pekarna said. “He’s an excellent engineer.”

Shoenbauer is a lifelong resident of Jordan and works for the Public Works Department of Elko New Market. He joined the department in May 2017 as a way to give back to the community and help people in their times of greatest need.

“I always thought it would be cool to drive around in a big red truck too,” Shoenbauer joked.

Shoenbauer, who’s worked on motors and vehicles his entire life, quickly made use of this handiness and mechanical experience. He was voted into the position of engineer shortly after joining. As engineer, he provides regular maintenance for the firetruck and department machinery.

Shoenbauer said one of the qualities that he believes makes a good firefighter is a strong sense of commitment to the community’s wellbeing.

“I’ve got two younger kids at home and sometimes they get put on the back burner because I’m down at the station — whether it’s working on equipment or back-to-back calls for four or five hours at a time,” he said. “You’ve got to be able to walk away from your family for a little while and help people in their darkest times.”

After nearly three years with the fire department, Shoenbauer said the community service and camaraderie with his fellow firefighters will keep him around for a while. One of his favorite parts of being a firefighter is engaging with the community outside of emergency situations.

“When we have our fundraisers and we get to out in the community and interact with the people from our community, I think that’s a good time, being able to see them and talk to them when there aren’t any problems,” Shoenbauer said.