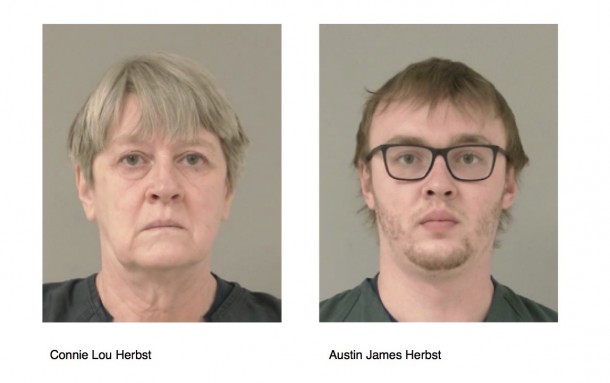 (New Prague Times) – On Thursday, Nov. 19, Scott County Sheriff Luke Hennen announced that Connie Lou Herbst (62) and Austin James Herbst (26), both of New Prague, were arrested in regards of the death of 63-year-old Gary Albert Herbst of Elko New Market. Gary Herbst, who was the husband and father respectively of the two, was reported as a missing person to the Elko New Market Police Department in 2014.  His remains were later found in Maple Grove Township in Barron County, WI in late 2017.
Scott County Sheriff Detectives, along with representatives from the Barron County Sheriff’s Office, the State of Wisconsin Department of Justice Division and Criminal Investigation, and officers from the New Prague Police Department arrested, without incident, Connie and Austin Herbst at approximately 7 a.m. on November 19. The two were booked into the Scott County Jail on suspicion of Second Degree Murder.
For more see an upcoming print issue of The New Prague Times.