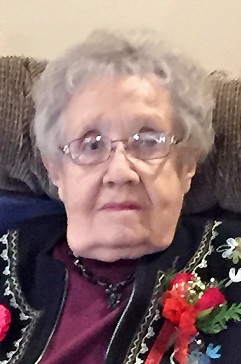 Born December 17, 1935, on the Jentz farmstead
in Tyrone Twp., LeSueur Co., near Henderson
MN, Myrtle Helen Jentz was the oldest daughter
of Ernest and Edna (Gregor) Jentz. A sister,
Ethel, joined the family about two years later.
Her early years were spent on the Jentz farm
until their mother died in 1940 when Myrtle was
five. After her dad’s marriage to Hilda Wiest in
1941, the family moved to a farm west of
LeSueur near Rush River in Sibley County.
Myrtle was baptized April 2, 1936 at St. Paul’s
Evangelical &amp; Reformed Church parsonage in
Henderson, and confirmed on May 29, 1949 at
Trinity Lutheran Church, Sibley Twp., Gaylord
MN. At Trinity she served as Sunday school
secretary and taught some of the younger
Sunday school classes for several years,
participated in monthly Bible studies of the
women’s group, and was active at worship. She
also was a member of the Rush River Extension
Group and the Birthday Club.
She attended country school at Rush River
District #7 (Sibley Co.) through sixth grade, and
LeSueur Public School through her junior year.
Her high school education was completed by
correspondence, and on November 19, 1968 she
received her diploma from American School,
Chicago IL.
Myrtle loved the farm. She participated in farm
work and helped care for animals such as sheep,
chickens, ducks and geese, milked cows by hand,
and assisted with threshing, harvesting and
haying. Being the oldest of five children, she
helped care for her younger siblings. She knew

how to help on the farm, and also enjoyed
vegetable and flower gardening, cooking, baking
and canning. Probably some of the least
enjoyable jobs were butchering, and cleaning
ducks, chickens and fish. Showing her young
nieces and nephews the tricks of the trade when
they came to visit was a special joy.
In addition to working on the farm, she was
employed as a dietary aide/cook at the
Minnesota Valley Hospital and Care Center for
almost 40 years. A dedicated hard worker,
Myrtle always gave her best even if working
conditions were poor, and was always willing to
fill in for coworkers. Despite rheumatoid and
osteoarthritis that took a toll on her body, she
continued to work until she couldn’t. She was
also employed for the Green Giant Company and
helped Ivan Schultz during the harvest season, as
well as caring for her father during his later
years.
Fishing was a favorite summer pastime until
mobility prevented her from doing so. She
enjoyed traveling to various parts of the United
States with travel groups, sewed, knitted,
embroidered dishtowels and other items, and
tore old garments into rags for rugs. Reading
newspapers, watching TV game shows and
shows from earlier days of television were also
her passion, and she faithfully listened to
worship services, news and the Minnesota Twins
on the radio. During her years at Comfort
Residence, she especially enjoyed their activities
for the residents such as bingo, Pokeno, Art and
Barb Straubs’ nature programs, and Bible
studies.
Never marrying, for many years Myrtle
supported children through International
Compassion. Companion animals, including
several of her own dogs, held a soft spot in her
heart. Snoopy, Ginger and Abby all preceded her
in death. She supported various humane
societies also.
The time she spent with family, neighbors, and
fellow church members was very important to
her. She developed lifelong friendships through
her work at the hospital/nursing home and at
the local restaurants where she occasionally

enjoyed coffee or a meal, and at her assisted
living home. She was a “walking history book”
and had a great knowledge and interest in family
connections.
Myrtle worked hard. She was a strong,
independent, frugal person who knew who she
was and what she wanted. She purchased her
first home in 1986 at the age of 50. Myrtle
assumed household responsibilities after her
stepmother’s death in 1964. When her dad’s
health required more care, she quit her job at the
LeSueur hospital/nursing home and lovingly
cared for him for many years. After his death in
1981 she returned to her dietary aide job. She
cared more about others and helped wherever
she found a need
Myrtle was preceded in death by biological
parents, Ernest and Edna (Gregor) Jentz;
stepmother, Hilda (Wiest) Jentz; brother-in-law,
Lowell Johnston; and grandparents, August and
Emma Jentz, William and Caroline Wiest, and
Louis and Wilhelmine Gregor.
She is survived by sisters, Ethel Johnston, Carol
(Tom) Jackson, Lois (Ken) Ahntholz and brother,
William (Barb) Jentz, nieces and nephews, grand
nieces and grand nephews, cousins, and many
friends.
Myrtle died on November 27, 2018 at the age of
82 at Comfort Residence, LeSueur. Her life was
celebrated at Trinity Lutheran Church, rural
Gaylord, on December 8. Interment was in the
church cemetery.
Visitation date and time: 3 to 7 pm on Friday,
December 7 at Kolden Funeral Home and 1 hour
before the service at Trinity Lutheran Church.
Memorials are suggested for Comfort Residence
Activities Dept. (105 Plum Run, LeSueur MN
56058), Trinity Lutheran Church (32234 – 431 st
Ave., Gaylord MN 55334), Blue Earth-Nicollet
County Humane Society (1250 N. River Drive,
Mankato MN 56003), or Ney Nature Center (P.O.
Box 93, Henderson MN 56044-0093).
Special thanks to the staff, volunteers and her
family at Comfort Residence for their

compassionate care and friendship during the
past several years.