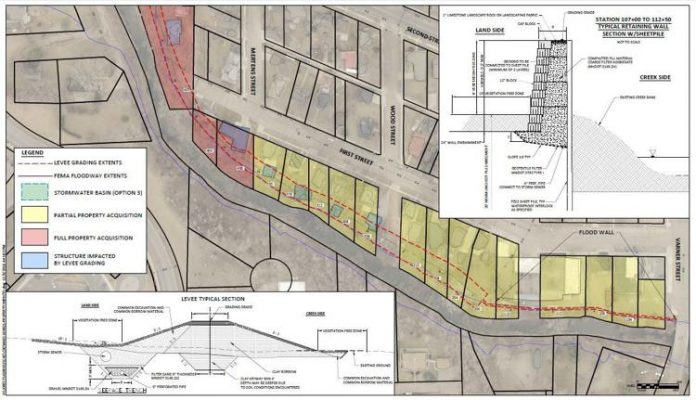 The Jordan City Council will make a flood control decision in the coming months that could drastically change the look of one downtown neighborhood. Possibilities range from replacing most homes and buildings on the south side of First Street West with a river walk or park to most of the homes remaining with smaller backyards and rearranged garages.

It’s all part of an effort to construct a levee along Sand Creek that would remove downtown properties from the floodplain and help protect Jordan from a disastrous 100-year flood event. City Engineer Mike Waltman said the last time Jordan experienced a flood of that magnitude was in 1960.

The levee would curb runoff flooding along Sand Creek between Varner and Syndicate streets. To make room for the levee, the city would need to buy out three properties and the rear portions of 14 other properties, most of which are homes and have garages. The city would pay fair market prices for the property.

The city also has the option to buy the full properties. But if the properties are fully acquired using state funds the land has to be used for a public purpose.

You can’t just flip it and resell it as private use,” Waltman said. “A park might be a great use, it might be a nice river walk.”

The levee would remove from a floodplain 64 properties now paying a combined $130,000 annually in flood insurance premiums, as well as 47 additional properties whose owners don’t have to buy insurance. Councilman Jeremy Goebel said full acquisition is the only way to make the project beneficial to all Jordan taxpayers.

“If we go through with this — because I was against this in general — I support full acquisition because that is one of the only ways that I can sell this to non-downtown taxpayers and how they benefit,” Goebel said.

The cost of the total project, which also includes a stormwater pond near Syndicate Street and diversion measures in Valley Green Park, could be covered by a mix of funding, including special assessments, general tax increases and state Department of Natural Resources hazard mitigation funding. DNR funds could cover a large amount and come from a competitive program that requires a 50% local match, capped at $2.4 million for Jordan. The council directed city staff to apply for the funding last year.

If the state aid comes through, the city council will considering two funding models. Both rely on $1.5 million in special assessments from properties benefiting from this project. The first option splits the remaining $940,000 evenly across the general tax levy and the stormwater enterprise fund while the second option draws the full $940,000 from the stormwater fund.