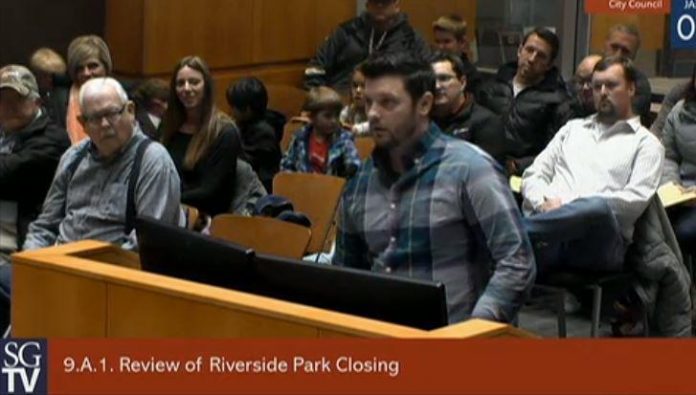 The Shakopee City Council turned down Jan. 7 a petition signed by more than 500 residents to keep the ice rink at Riverside Park just east of Dean Lake in Shakopee open. The rink was nixed due to the 2040 Parks and Recreation Master Plan citing budgeting and efficiency reasons. Members of the Riverside neighborhood crowded the council chamber to show their support in keeping the ice rink.

The city has also decided to get rid of the Westminster and Scenic Heights ice rinks.

“Of the ice rinks getting cut, Riverside Fields neighbors are the only ones fighting to save their rink,” Jess Lowenberg, a resident who organized the petition, wrote to the city council. “Please listen to us, look at all the facts, and give us one more winter to prove to you that the ice rink is worth keeping.”

When the city council adopted the parks and trails master plan in August, getting rid of two ice rinks was part of the package.

But residents upset by this decision said they didn’t anticipate Riverside Park would be one of the rinks on the chopping block.

Lowenberg started an online petition Dec. 31 to reverse that decision, imploring the city council to “admit an oversight” and allow the ice rink to continue operations.

The Riverside rink costs approximately $11,000 to maintain each year, but Lowenberg argued those costs could be easily mitigated.

Lowenberg originally appeared before council at a December meeting to bring up the general concern that most of the residents who use the rink are children, many of whom are too young to drive to the next-nearest ice rink.

City Administrator Bill Reynolds said the city is thinking about using the boards and lights from the Riverside rink and placing them at Lions Park to create two sheets of ice to be used for broom ball tournaments and other larger events, saying it would allow for ice rinks that would be the most evenly dispersed throughout Shakopee.

The city council’s decision to close the rink came after what Reynolds said was a year-long process of searching for public input.

“It is the staff’s opinion that this was well researched,” Reynolds said. “In fact, this was the most well researched plan we had, aside from our comprehensive plan.” He added there were 14 community meetings held to garner public input throughout the process of deciding where to consolidate the city’s ice rinks to cut down on operational costs.

Shakopee Mayor Bill Mars said he was disappointed he was hearing the complaints after the change had been implemented instead of during the year-long process. One resident spoke in response to his remark, claiming she had never been notified that her neighborhood’s rink would be impacted by the parks master plan.

“We can’t force you to read (the notices),” Mars said. “I do think outreach has gotten substantially better in the last few years.”

Mars also said he believes all parks must change and evolve, and this is one example of change that is necessary, though it might be hard for residents to accept.

“For me, it brings me back to my youth,” he said. “Change is difficult.”

“I mean, it’s unrealistic to expect children to find ice when they can’t drive,” Lowenberg said, adding there are more than 30 kids under 12 on every cul de sac in the Riverside neighborhood, which is a growing development. In the petition, Lownberg noted the neighborhood had planned to host a potluck every week at the rink before it learned the city was shutting it down.

“When we have this many people coming to us who are our constituents, we are supposed to listen,” Councilman Matt Lehman said. Lehman voted against the parks master plan, and he said this issue was part of the reason. “I have no problem keeping your ice rink open.”

Lehman made a motion to keep the rink open, but the motion failed. The vote to affirm council’s initial decision to close the rink was passed four to one, with Lehman dissenting.

One woman booed as the Riverside neighbors filed out the chamber doors disappointed.

“Thank you,” Mars said. “We appreciate your passion.”